Tired of the sticky problem of pigeon poop? 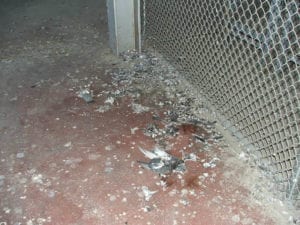 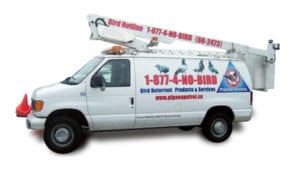 Our Saturday column about hundreds of pigeons that gather at Lawrence Ave. and Markham Rd. to gobble up food spread for them, then perch on overhead wires and rain down droppings on everything below, prompted plenty of indignation from readers.

City bylaws prohibit the feeding of wildlife — including pigeons and seagulls — in city parks and public spaces, but do not ban people from feeding them in other places, like a privately-owned parking lot.

That seems to be a sore point for readers, who directed us to other locations where pigeons are no less a problem, due to people who feed them regularly and are indifferent to the mess created by the overstuffed birds.

Jim Barrett sent us photos taken last year of a man spreading bird feed from a bucket in a parking lot at the Colony Plaza, on Lawrence, near Warden Ave., surrounded by hundreds of hovering pigeons.

One of his photos showed a flock of birds on the sidewalk in front of one of the plaza storefronts, which must be a source of frustration for shopkeepers whose customers don’t want to wade through them, or their droppings.

Francesca Vivenza said she contacted the TTC many years ago about “the many pigeons” that sit on utility wires outside Broadview station, where they bombard pedestrians beneath them.

“An old lady regularly brought bread to feed them,” she said. “One day I stopped and talked kindly to her, explaining that the pigeons are dirty, unhealthy … I got plenty of insults and left.”

Don Fairbairn said food is spread for birds at a strip mall at Markham and Eglinton Ave., which draws thousands of pigeons, and also at Bluffer’s Park, at the foot of Brimley Rd., despite rules which disallow it.

“There are signs there not to feed the wildlife, but they are ignored,” he said, adding that he has never seen evidence that the bylaw is enforced.

The best note came from Francis van Dorsser, who is also familiar with the pigeons at Markham and Lawrence and observed what could be an excellent method to keep them in check.

“This past spring I was waiting in my car for a person in the medical clinic,” in the plaza where the pigeons are fed. “All of a sudden pigeons were flying in every direction. I though of the movie, ‘The Birds.’

“A few minutes later, all was calm. Directly in front of me on a rooftop was this hawk, enjoying a pigeon feast. He had swooped in, picked up his meal and started dining.