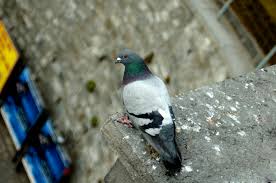 Elderly tenants of a Penticton apartment building may be at risk of contracting a fatal disease due to “large accumulations” of pigeon poop in the ceiling above a fourth-floor hallway, according a public health inspector.

The warning is contained in a July 19 letter from Interior Health to the manager of King’s Court at 66 Duncan Ave. West.

Signed by environmental health officer Stephanie Carver, the letter, a copy of which was obtained by The Penticton Herald, outlines findings of a July 15 inspection of the 52-unit building.

“We observed large accumulations of pigeon guano in the ceiling tiles above the fourth floor east-west hallway. The accumulation of guano was dry, indicating accumulation has occurred over time,” Carver wrote.

“A substantial amount fell out when one ceiling tile was lifted up and it was evident the hallway ceiling tiles are full of guano and other roosting material. There were also visible signs of waste dripping down the sides of the ceiling into the hallway above residents’ doors.” 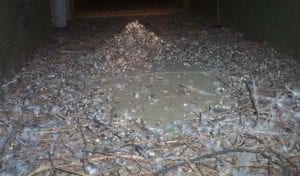 Carver goes on to note pigeon poop carries diseases such as cryptococcosis, histoplasmosis, candidiasis and encephalitis, “which can be fatal to the elderly population.”

“The amount of guano that was observed is quite significant and is considered a health hazard. Our biological concerns at this point are the many disease that are found in guano that can easily spread to the occupants as well as the amount of flies that are being attracted to the area,” she added.

Despite that warning, Interior Health gave the building owner 1-1/2 months to clean up the mess.

“The guano is not in the apartment living spaces and does not currently present an imminent health risk. It will require a fair bit of work to address the issues which have built up over time, so we have given the property owner until Sept. 3 to fix the problem,” Jennifer Jacobsen, interim manager for environmental management, said in a statement.

“If it is not addressed by that time, IH can and will take additional steps, including an order under the Public Health Act and potential violation tickets. From a public health perspective, this is a problem that does need to be fixed.”

A fourth-floor resident who spoke on condition of anonymity for fear of reprisals told The Herald he’s been complaining about the problem for years to the building owner, Sandy Creek Properties, but to no avail.

“They just refuse to deal with anything,” he said.

But after finding a maggot in the hallway outside his door about a month ago, the man redoubled his efforts and contacted various outside agencies, including Interior Health, the Residential Tenancy Branch and the City of Penticton.

During a visit Monday, a reporter could hear what sounded like pigeons cooing and scratching in the hallway ceiling just outside the man’s door.

Sandy Creek Properties administrator Trina Murray said the company is aware of the problem and the cleanup will begin soon.

“We’ve actually had that contract out for quite some time, and I believe (the work) is starting next week,” she said in a telephone interview Monday.

Murray said she’s been with the company for a year, but wasn’t aware of previous complaints about the issue. She was also unsure if tenants will be moved out during the cleanup.

“I know there will be a process. If they need to be moved, they will be moved,” said Murray.

Have a Pigeon Problem?