Shadick doesn’t much care for pigeons, but she doesn’t want them to suffer. 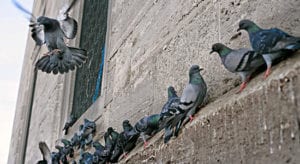 Shadick doesn’t much care for pigeons, but she doesn’t want them to suffer.

When the wildlife rehabilitation organization she operates began receiving more and more calls about apparently-poisoned pigeons, Shadick decided to act. She wants the city to ban pest control products that affect the birds’ nervous systems.

“Pigeons are coming in suffer from seizures,” Shadick said, adding that 34 of the 54 bird-related cases Living Sky Wildlife Rehabilitation has dealt with this year involved pigeons with such symptoms. Around half did not survive, she said.

“These are only the pigeons that survive long enough to be found,” she noted, wondering what happens to birds and animals that decide to dine on a pigeons that has suffer ingested the product and died somewhere accessible.

While Shadick admitted that she does not have direct evidence linking pigeons showing seizure symptoms with any specific pest control product, she nevertheless made her case for a ban in a letter to the city’s environment committee.

“While I understand that many people consider pigeons to be a pest and want to get rid of them, the use of neurotoxins is not a humane process, nor is it acceptable to risk putting that poison into our environment,” Shadick wrote.

She said she is especially concerned about a product called Avitrol, which, according to its manufacturer, uses the compound 4-aminopyridine to induce “behaviours similar to an epileptic seizure” that are intended to frighten away flocks of birds.

The symptoms “may include flying erratically, vocalizing, trembling, dilation of the pupils and other symptoms,” according to Avitrol Corp. The Tulsa, Oklahoma-based company did not immediately provide a comment on Thursday.

Pigeons are known pests that can cause damage to private property as well as municipal infrastructure. However, Saskatoon’s electrical utility said Thursday it has not used “chemical repellents” for pigeon control at its facilities since 2017.

In 2016, the federal government granted “continued registration” of products containing 4-aminopyridine for use on birds, including “feral pigeons.” At the time, the only such products available were all manufactured and sold under the name Avitrol.

Health Canada said the products do “not present unacceptable risks to human health or the environment” if used properly.

While Avitrol is legal to use in Canada, some municipalities in the country have opted to cease using it. The cities of Red Deer and Halifax have both committed to no longer using Avitrol. It is also banned in New York and San Francisco.

“I don’t think it’s very nice for the pigeons at all. It’s not a pleasant way to live — or to die. I don’t think any animal deserves that, even if we don’t like it,” Shadick said, noting that there are viable alternatives that stop the birds from reproducing.

This is not the first time Shadick has advocated against poisoning pests. Late last fall, a dead great-horned owl with blood around its beak led her to warn people about the dangers of using anti-clotting agents to poison rodents.  [email protected]   twitter.com/macphersona