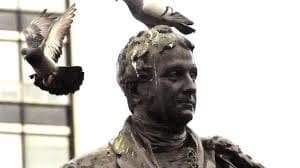 Inspectors began documenting the build-up of pigeon dung on the span near downtown Minneapolis two decades ago.

Although investigators have yet to identify the cause of the bridge’s Aug. 1 collapse, which killed at least 13 people and injured about 100, the pigeon problem is one of many factors that dogged the structure.

“There is a coating of pigeon dung on steel with nest and heavy build-up on the inside hollow box sections,” inspectors wrote in a 1987-1989 report.

In 1996, screens were installed over openings in the bridge’s beams to keep pigeons from nesting there, but that didn’t prevent the build-up of droppings elsewhere.

Pigeon droppings contain ammonia and acids, said chemist Neal Langerman, of the American Chemical Society. If the dung isn’t washed away, it dries out and turns into a concentrated salt. When water gets in and combines with the salt and ammonia, it creates small electrochemical reactions that rust the steel underneath.