Most birds take a sip of water and throw back their heads to let the water trickle down their throats. But pigeons (and all of their relatives in the family Columbidae) suck up water, using their beaks like straws.

Pigeon Behavior: Do pigeons have compasses in their heads? Not really, but pigeons, especially those bred for their homing instincts, seem to be able to detect the Earth’s magnetic fields. Cornell University pigeon researcher Dr. Charles Walcott says that magnetic sensitivity, along with an ability to tell direction by the sun, seems to help pigeons find their ways home.

On the ground, pigeons don’t hop the way many birds do. They walk or run with their heads bobbing back and forth. Pigeons are strong fliers and can fly up to 40 or 50 miles per hour. Some pigeons are raised for their exceptional abilities to fly fast and find their ways home. These pigeons may fly as far as 600 miles in a day. Although feral pigeons are good fliers too, most of these birds seem to stay close to their regular feeding sites.

As gregarious animals, feral pigeons tend to nest in flocks. Once they settle, they tend to nest at the same place for the rest of their lives. Pigeons are extraordinarily intelligent. Even when removed from the nest, they will return back to it. The distance doesn’t play a role—pigeons have “built-in” compasses in their bodies which provide tremendous help with orientation. No matter how far away from their home they are released, they will still find their way back.

Feral pigeons breed rapidly. They lay two eggs, up to six times a year—depending on the food available. If a local population is decreased, pigeons from other areas flock to take advantage of the abundance of food. Thus, poison often causes population boom rather than decrease.

Man is by far the greatest predator of pigeons. Yet they also have plenty of other predators too including Falcons, Sparrow, hawks, Owls, Foxes, Ferrets, Snakes, Rats, Cats, Dogs and more.

One species of falcon, Merlin, eats so many pigeons its scientific name is Falco columbaries (with the “Columba-” meaning pigeon) and it was formerly called pigeon hawk. Merlin’s are medium-sized falcons and although they are not very common in cities, you can bet they are preying on pigeons living in open parks near marshes and ponds.They are small and quick and they tend to prefer park areas rather than high towers. They hide in trees, or drop down from light posts. The one I saw took his pigeon back up to a tree and the only evidence was a few feathers drifting down occasionally. I only ever saw that once, but I know they are around. I bet you have them too. Another falcon that is a natural predator of the pigeon is the peregrine falcon, a bird that can achieve speeds of up to 200 miles per hour in a dive and one of the few birds that has the speed and the maneuverability to outpace and catch a pigeon in flight. In North America some big cities have wild Peregrine Falcons. These falcons like to nest on high cliffs, and city high rises work too. There is a famous pair in San Francisco, for example. Whenever these birds find a ledge to nest on, the Eagle-cam team is usually not far behind. 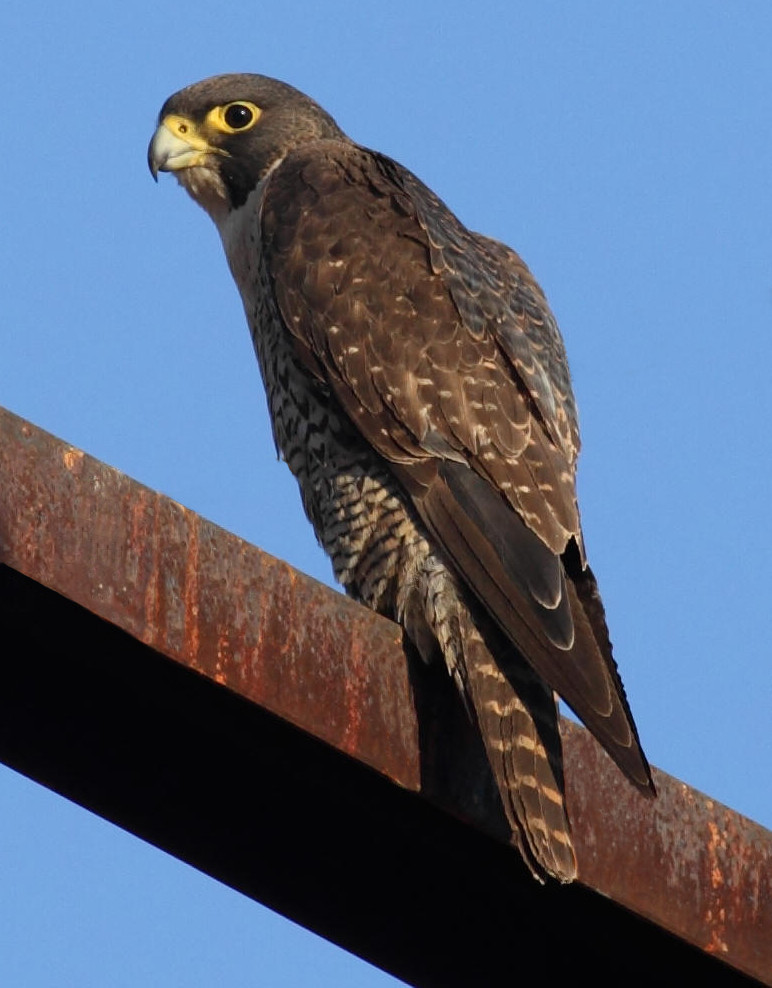