Did THEY Really Banned Pigeons? 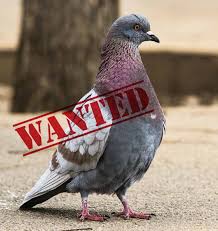 Rumor claims the Islamic State (ISIS) banned pigeons because the visibility of their genitals as they fly overhead “offends Islam.”

Claim:   ISIS has banned pigeons because their visible genitals in flight “offends Islam.”

I’m seeing reports that ISIS clerics have banned pigeon breeding because the sight of pigeon genitals is offensive to Muslim sensibilities. Since pigeon genitalia is something I’ve never in my 60+ yrs seen I doubt the truth of this story.

Origins:    On 2 June 2015, the British Daily Mail newspaper published an article titled “ISIS bans pigeon breeding — punishable by public flogging — because seeing birds’ genitals overhead offends Islam.” In short order, the newspaper’s claim was widely aggregated to other outlets, with its multiple iterations lending it an air of credibility:

When rumours of an ISIS ban on pigeons began to circulate earlier this year, it was widely assumed that it was related to the birds being used to either smuggle anti-ISIS messages or cigarettes.

However the new document clears up that misunderstanding, clearly stating that the ban is intended ‘to put a stop to the greater criminal act of harming one’s Muslim and Muslim women neighbours, revealing the [pigeon’s] genitals and wasting time.’

On 5 June 2015, the claim received additional attention when HBO host Bill Maher discussed it at length during a segment of his show Real Time with Bill Maher. Maher pointed to ISIS’s purported pigeon genitalia ban as an example of how Islam’s core ideology was incongruent with that of the Western world