A man had pigeons in Vancouver. 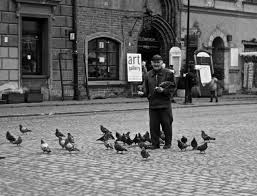 A man had pigeons in Vancouver.

Earlier this year, she had at least three conversations with fellow Councillor Lisa Muri regarding pigeons, according to emails. In July, she asked Muri to pass a bylaw to outlaw them, according to an email obtained by CBC.“I have a pool that pigeons fly over and poop as well as flying and roosting on the rest of my property,” she wrote July 6. A few days later, Muri requested staff ban pigeons from the district.

That didn’t stop council voting 4-2 for the ban in November. Forbes recused herself, declaring a conflict of interest, but she still might’ve breached B.C.’s Community Charter that prohibits councillors from influencing council votes, recommendations or decisions.

At a Nov. 2018 council meeting, Forbes made her first public statement regarding the controversy.

“It has always been my intention to act with integrity in the best interest of the district both as a private citizen and as a councillor,” she said. “If I have erred in anyway, I assure council and the community that it was done inadvertently and in good faith with my understanding, as a new councillor, of the conflict of interest rules.”

We feel this is a corrupt way of passing bylaws.  Givo Hasko, pigeon breeder

She called for more conflict of interest training for councillors.  Droves of concerned citizens also spoke.

“I am passionate about transparency and trying to work things out as neighbours,” said Dulay’s neighbour Krista Page, who came out in support of the family. “I just feel this is very much a misuse of power.” Givo Hasko has been breeding, showing and rescuing pigeons for a decade. He told council “We are here for a love of pigeons. We feel this is a corrupt way of passing bylaws.”

Others were concerned about pigeons causing damage with their frequent acidic poops, and the possibility they could spread disease. Corrie Kost said his parents final years in their lake-side apartment would’ve been more pleasant if it weren’t for the pigeons pestering them.