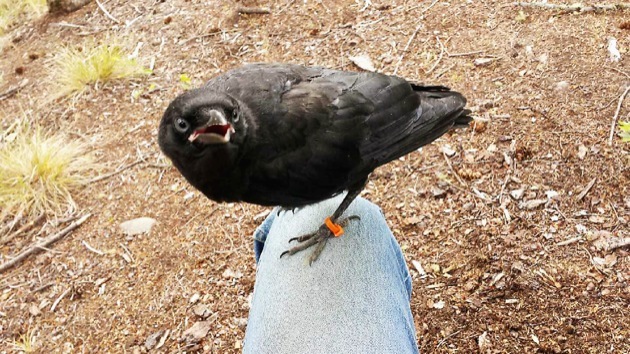 Greg Pigeon called a television station and told them: “That’s my crow.”

And a peculiar story in the British Columbia news got even more peculiar.

The interesting tale involves a Cariboo resident, a young guy on a bike and a crow “attack” in Vancouver, a video on the Internet, multiple news reports about that video, and now, contradictory stories about where this simultaneously pesky and charming bird named, Crow, with no fear of people and an orange zip tie around its foot, really came from.

According to reports, East Vancouver locals say the crow in question fell from its nest as a baby and people there nursed it back to health.

The crow stuck around and now it’s like their friendly neighbourhood crow, a sort of precocious feathered mascot of the community, hanging out at racetracks and soccer fields, entertaining children, flying around and brazenly pecking items from people’s pockets.

The bird apparently goes by many names down in the Lower Mainland: Crackers, Mr. Jack, Canuck and Jerome.

An East Vancouver resident who was featured in the reports calls him Crow. This is what Pigeon, a 108 Mile Ranch resident, calls him, too.

But Crow was raised in the Cariboo, Pigeon claims, not in Vancouver.

The way Pigeon tells it, he found Crow in the spring at his parent’s farm near Clinton. The baby bird fell from its nest and Pigeon’s son, Steven, took care of it when the family brought it home to 108 Mile Ranch, and raised it like a pet.

“It learned how to fly eventually,” says Pigeon. “It flew around our house and visited our neighbours and they got to know him.

“He just kept coming back. Eventually, he disappeared.”

Before the bird went missing around August, Pigeon tied an orange zip tie around its left foot to distinguish it from other crows in his yard.

Pigeon says there’s no doubt the crow on the news is the same crow. After all, he asks, what are the chances there are two strikingly social, heart-winning crows flying around B.C. – with the same colour zip tie on the same foot?

Reached via e-mail and asked about the likelihood of Pigeon’s crow being the same crow in the Vancouver news reports, Tom Dickinson, Dean of Science at Thompson Rivers University in Kamloops, says the orange strap on the bird’s leg is “a perfect match” and he suspects it is the same bird and Pigeon’s story is true.

“Only two ways to get there: fly or hitch hike,” explains Dickinson, whose research includes bird communities in high elevation forests.

“It isn’t that far to go, especially if there is favourable wind and weather. But given how tame this [crow] looks, it is at least equally likely he was foraging inside a truck bed (or the like) and maybe didn’t get out before the door slammed and found himself in Kerrisdale.”

Pigeon shares a similar theory. But no matter how the bird made its way south, he just hopes Crow eventually makes his way back up to the Cariboo, and hopes no one hurts him in the meantime.

“If he seems to be a pain the butt, the main thing is ignore him and he’ll find someone else. If you feed him, he’s going to continue staying around.

“He’s more than welcome around our house. We enjoyed having him around.”