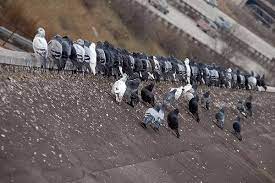 Hanging on roof and window ledges throughout the Bay Area, pigeon spikes serve as one of the many deterrents that protect local buildings from the oft-maligned birds.

San Francisco’s pigeons are feral “rock doves.” Ornithologists believe the pigeon was the first domesticated bird, originally prized in the Middle East 6,000 years ago for the delicious meat of its squabs and the fertilizing prowess of its waste. Pigeons are highly adaptable; they nest in a wide variety of locations and will eat almost anything.

Pigeons are edge-landing birds. When landing above ground, they land only on peaks or at perimeters, where they can use their claws to grip for stability. To deter pigeons from a building, only those areas need to be blocked.

Many pigeon spikes are not pointed. Birds Away/Pigeons Away, a 25-year-old company based in Concord, uses only blunt-ended prongs. It decided spikes were inferior to prongs because they injured birds and snagged flying debris like large leaves, newspapers and plastic bags.

Domestic carrier pigeons have been used for centuries to transmit messages during wartime. An American bird, G.I. Joe, received a medal for his courageous flight in World War II, traveling 20 miles to safeguard the lives of British soldiers.

Pigeons can transmit heart and kidney diseases to humans, as well as salmonella and encephalitis. They also carry parasites like ticks, mites, fleas and lice.

The de Young Museum is protected from pigeons by an invisible “shock track” on its edges that is charged with a low voltage.

At the Balboa Park BART station, pigeons tried to nest between the spikes, but they got stuck and eventually starved. BART has also tried to deter pigeons with fake owls and rubber snakes.

Highly acidic pigeon feces can corrode paint and most metals. The droppings on sidewalks can also lead to liability issues, like slip-and-fall lawsuits.