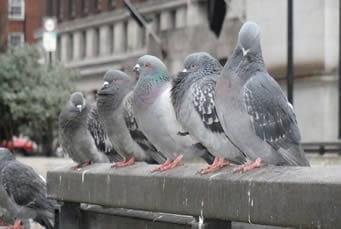 I never thought much about pigeon excrement until I moved into a condo several years ago and discovered two birds nesting on the balcony. Because my daughter was worried about the cute little eggs, I waited till the squabs were old enough to fly before clearing out the nest and piles of excrement, along with all my pigeon-defaced outdoor furniture. Then a building reno temporarily solved the problem, but as soon as the jackhammers stopped, the pigeons were back and defecating with impunity.

I decided to take action, and quickly discovered some hard facts. Pigeons, instead of nesting in trees, prefer buildings, especially tall buildings with ledges and balconies – i.e., condos. This was bad news in a city undergoing an extended real-estate boom, and this past week analysts were guessing the condo market’s record growth (about 40,000 a year for the past five years) will continue at least until 2010 – which means even more condos, i.e., more perfect pigeon abodes, i.e., more excrement.

Though there’s no pigeon census, many Toronto residents are feeling plagued by pigeons this summer. And it’s possible the rise of condos will increase the pigeon population, says Tom Mason, curator of invertebrates and birds at the Toronto Zoo.

Homeowners are complaining of backyard birdfeeders being overrun with pigeons. And certain areas – like the “pigeon gauntlet” north of Broadview subway station – have become legendary. “When they’re not feasting on bread strewn by crazy old people, they’re packed onto the hydro lines above,” says a Riverdale resident. She cited a recent incident involving a man in a crisp suit, “obviously a stranger to the neighbourhood,” who walked straight under the line of fire. “It looked like someone had upended a container of yogurt on him, honestly, it was that copious. He started running around in circles, screaming, then ran off.”

So Toronto’s pigeon problem was bigger than I’d bargained for – but surely I could get them off my own balcony. I started with humane pigeon deterrents: a bobble-headed “scary” owl, fluttering strips of aluminum foil, twirly children’s toys. Nothing worked.

Whenever I heard pigeons cooing on the balcony, I hammered on the window, or leaped out the door shrieking, “Get out of here, you bastards!” In fact, I got so used to the routine that I stopped explaining the outbursts during business calls. As the battle escalated, I laid in wait with water guns, ambushing the enemy as they landed on my railing, or sneaking over to my neighbour’s balcony – where I knew pigeons were nesting behind a deck chair. There, I would jump up, crane around the partition and blast away at the cornered pigeons as they ran around in circles. One day, it occurred to me that I might encounter – and shoot – the neighbour, so I stopped.

It was time to do more research.

Toronto’s feral pigeons are descended from domestic birds brought over by early settlers. Males and females look the same, are monogamous and take turns incubating eggs, which arrive two at a time. Both parents nurse the babies with a nutrient-laden “crop milk,” which can double the wee ones’ weight in 34 hours.

“What’s also amazing,” said ornithologist Mark Peck of the Royal Ontario Museum, “is that, as far as I know, they are the only bird in Ontario that breeds throughout the entire year,” which means up to nine “clutches” per annum.

Pigeons are also uniquely skilled at navigation – able to fly 70 kilometres per hour, covering up to 1,000 kilometres in a single race. In wartime, pigeons saved lives by carrying military messages across enemy lines. Science hasn’t figured out the exact mechanism, but the motivation, explains the zoo’s Mr. Mason, is that they’re frantically trying to get back to their nestlings.

This is the trouble with research. You seek data to support a pigeon-killing spree, and you end up discovering pigeons are a lot like humans, except pigeons have a lower divorce rate.

So let’s not forget their capital offences. The Nixalite Architectural Bird Control website states that pigeons are “a vector for more than 50 human and livestock diseases.” Their droppings fade finishes on cars and planes, can destroy wood, stone and marble, corrode I-beams, ruin cloth awnings, short out electrical equipment and fill attics with so much excrement “that the actual ceiling collapses.”

On an excrement-removal website, the U.S. General Services Administration warns that pigeon excrement can “lead to potentially fatal diseases of the lungs and central nervous system such as histoplasmosis and cryptococcosis.”

In fact, the Web is packed with anti-pigeon content. The problem: There seems to be no evidence of pigeon-caused plagues in real life. “That’s correct,” said Dr. David McNeely, associate professor of infectious diseases at University of Toronto. Avian-related diseases are rare to begin with, he said, and they’re usually caused by other species. “Don’t pick on poor pigeons,” Dr. McNeely said. “If you want to worry about bird-related diseases, worry about budgie dander.”

Similarly, Mr. Mason, who works at the zoo with pigeons and other birds daily, has never heard of a case. Nor has Mr. Peck at the ROM, who adds how important pigeons have been to science, from Darwin and B.F. Skinner to the present. “Pigeons are not bad birds,” Mr. Peck said. “They’re just successful.” 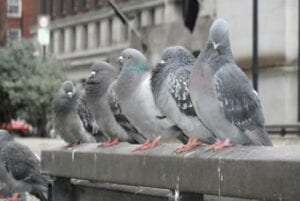 These scientist types weren’t helping my case against pigeons at all. I phoned the city to ask if it was legal to kill them. “There are no bylaws that apply to wild pigeons,” said Rishma Govani in the public health department, though “there are rules” about owned pigeons.

Next, I spoke with Donald Fraser, principal of Beacon Environmental impact-assessment (and a former researcher on goose defecation habits, which I figured was close enough to my area of interest), who explained: “It is legal to shoot or kill pigeons because they are a non-migratory bird, and thus not covered by the migratory bird act between Canada and the United States.” You need a permit to shoot gulls, or a hunting licence to shoot geese or ducks, for example, but pigeons are fair game. Mr. Fraser did caution, however, that there might be consequences if firearms were discharged within the city.

Indeed, Constable Wendy Drummond of Toronto Police Services confirmed that, while feral pigeons were not protected by the Criminal Code (the sections on animal cruelty pertain mainly to owned animals such as cattle, she said), any discharge of a pellet gun with intent to kill would result in a weapons charge. Snapping their little necks, quickly and humanely, would be tolerated, she said, “unless, you know, we find 100 dead pigeons.”

So pigeons are good family birds, heroic during wartime and, as Mr. Fraser also pointed out, good scavengers who help keep city streets clean (when not filling them with excrement, that is, but never mind). So maybe we shouldn’t kill them. But feed and encourage them? No way.

On this point, I agreed with London Mayor Ken Livingstone, who reduced pigeon numbers in Trafalgar Square by imposing a controversial feeding ban in 2003. A friend recommended I speak to a woman who fed pigeons in her local park. Oh goody, I thought – my anti-pigeon case would definitely be enhanced by a real-live wacko, probably wearing old rags and a squashed hat covered in excrement, ranting about pigeon rights.

Well, the crazy pigeon lady turned out to be novelist Barbara Gowdy, who may or may not be as deranged as the next writer, but who is undeniably smart, attractive, well-groomed and socially responsible.

“I only feed them at the end of the park, away from homes, during inclement weather, when there is snow and ice on the ground and it’s impossible for them to get food,” Ms. Gowdy said.

For a while, when people attacked her for feeding pigeons, she handed out pamphlets from the Centers for Disease Control and Prevention, which stated, she said, that “even if you ate pigeon excrement, the only thing you’d get is a mild stomach ache.”

Ms. Gowdy is nothing if not persuasive. Or maybe I was ready to crack. After starting out on a crusade to kill all pigeons, I now considered eating pigeon excrement in order to properly research this article.

In any case, the fight had gone out of me – mainly, I think, because of one detail I couldn’t get out of my head: The reason pigeons love condos is because the high-rise towers resemble ancient cliff faces, near Asian seas, where rock doves originally made their homes. That image of our city’s condos as soaring cliffs along the edge of Lake Ontario transformed my view of both the buildings and pigeons.

Ms. Gowdy was right: Toronto’s feral rock pigeons have as much right to live here as we do, and the city would be a much poorer place without its wild animals. I’m willing to live and let live – though it would still be nice to find a way to stop them from living on my particular balcony.