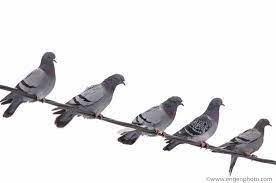 Iron crystals in their beaks give birds a nose for north.

The discovery seems to settle the question of how pigeons (Columba livia) have such an impressive ‘nose for north’. Some experts had previously suggested that the birds rely on different odour cues in the atmosphere to work out where they are. But the latest findings suggest that they are using magnetic cues.

The idea that pigeons’ beaks contain tiny particles of an iron oxide called magnetite is not a new one, says Cordula Mora, who led the latest study at the University of Auckland, New Zealand. But the particles themselves are likely to be only a few micrometres across, and no one has ever seen them under the microscope.

Mora’s behavioural experiments therefore give the best indication yet that pigeons are aware of Earth’s magnetic field. She and her colleagues taught the pigeons to discriminate between magnetic fields by placing them in a wooden tunnel with a feeder platform at either end and coils of wire around the outside.

The pigeons were trained to go to one end of the tunnel if the coils were switched on, generating a magnetic field, and to the other if they were switched off, leaving Earth’s natural field unperturbed. “I was pleasantly surprised. The pigeons were very fast learners,” says Mora, now at the University of North Carolina in Chapel Hill.

Their skills were impaired, however, when the researchers attached magnets to their upper beaks, and also when the upper beak was anaesthetized. This suggests that their ability is down to the presence of magnetically sensitive material in this area, the researchers report in this week’s Nature1.

The team then set about seeing how these magnetic signals might be transmitted to the birds’ brains. When they severed the ophthalmic branch of the trigeminal nerve, which leads from the upper beak to the brain, the birds were unable to distinguish between natural and perturbed magnetic fields. But when the olfactory nerve, which carries smell signals, was cut instead, the birds performed fine, dealing a seemingly fatal blow to the idea that they navigate by relying on odours.

The results sit well with previous studies of another impressive navigator, the rainbow trout. The species both seem to have a system in which signals from magnetite particles are carried from the nose to the brain by the trigeminal nerve, says Mora. This is not surprising, she says, as iron-containing materials are common in many animals’ bodies.

So why has nobody seen the particles? Other researchers are looking for them, Mora says. But the problem is that even though we know where to look, they are elusive because of their small size and the fact that many other biological materials, such as blood, contain iron.

The particles are small because there’s no reason why they should be any larger, Mora adds. “You don’t need a large receptor structure like you do for the eye, because the magnetic field permeates everything,” she says. “It’s like a needle in a haystack.”