This morning as I was getting some worked finished, I noticed two crows on the roof across our ally. They had a large object which I first thought was something from the dumpster and then noticed what looked like it had chicken feet. I opened the window to get photos. Because it was cold out, the heat from my window made for some fierce shimmer and the photos are blurry…but you get the idea of what they are eating. Again, if you don’t like gross stuff, or don’t like the whole predator prey relationship thing, stop reading now. 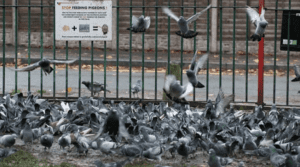 When I first saw the feet, I was reminded of the quail that we get to feed the birds at The Raptor Center, but there are no quail around here. Then I realized that the bird the crows were eating had only pin feathers–it was a young bird from a nest. By the size, I realized that they were eating a pigeon nesting.

The pigeon nest was tucked in a nook on the roof of an apartment building just to the right of where the crows were eating. I’ve seen pigeons in and out of there all winter and assumed roosting–I didn’t guess that they were on eggs last month.

When the crows were finished, I went back to business in my apartment. About fifteen minutes later I found them working on another chick. That surprised me. It makes sense to clean out a whole robin nest–those are small chicks, but a pigeon chick is fairly large, I was surprised that they ate both nestlings right away, but when you find a huge protein source like that and you are in the process of laying eggs yourself, you’re not gonna be able to resist it.

And let’s keep in mind that this is gross and it may not be pretty to watch a crow clean out a nest–but they are not the only ones to do it. Blue jays do it, hawks do it, owls do it–even woodpeckers do it. Heck, even nut job humans in England do it. Crows are just more obvious about it.