Getting inside the mind of a pigeon 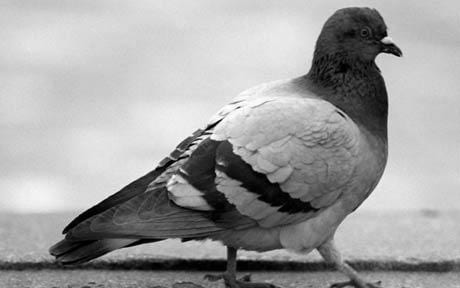 If you could ask any animal ‘A penny for your thoughts’, which would you choose? When the question occurred to Fumihiro Kano from Kyoto University, Japan, he decided to focus on the great apes. ‘Eye movement is a good indicator of attention, cognition and emotion’, he says, explaining how he uses an infrared eye tracker to monitor ape eye movements to understand their thought processes. However, after a decade, Kano decided to switch from working with apes to investigating the minds of homing pigeons through their eyes. Bird eyes are almost fixed in their sockets, allowing Kano to infer where they are gazing from the movements of their heads alone. Teaming up with fellow primate biologist – Dora Biro from the University of Oxford, UK, who also has a passion for researching pigeon navigation – Kano set about designing a head sensor that would allow him to measure the birds’ head movements to test how they use their eyes while homing through the Oxfordshire countryside. 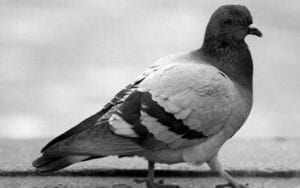 Combining a GPS tracker, microcomputer and battery in a pigeon-sized backpack, Kano added an inertial measurement unit, which could track the bird’s head movements using a gyroscope and accelerometers, mounted on a custom-built mask. ‘Constructing the mask was actually the most challenging, but most fun, part of this study’, smiles Kano, who frequently visited the local craft store in Oxford to try out different materials until he had perfected the wire, felt and elastic band design. ‘The most important thing was to design the mask so that it did not interfere with the bird’s breathing when flying’, he recalls, adding, ‘Most of them were okay to wear it, but some of them didn’t seem to like it and immediately took it off, so we continued to modify the design until they were comfortable’. Once Kano, James Walker, Takao Sasaki and Biro were confident that the pigeons were content to fly wearing their new accessories, the team drove the birds 4 km up the road and then released them individually for the 10 min flight home.

Downloading the data after each bird returned, the team was delighted to see every detail of the head manoeuvres, in addition to the GPS plot of the return flight path. The first thing that they noticed was how stable the birds’ heads were; ‘it is like a high spec gimbal’, says Kano, describing how the heads of the animals barely wobbled. It was also clear that the pigeons were actively glancing from side to side, scanning the landscape, during their solo flights; ‘[They] moved their heads far more than necessary for manoeuvring flight’, says Kano. In addition, the birds reduced their head movements when approaching landmarks, including a main road and a railway line, ‘which indicates that they indeed “see” them to navigate’, says Kano. Finally, the scientists dispatched the birds in pairs to learn more about how they use their eyes when flocking, and noticed that the birds reined in their head movements when flying with a partner, ‘indicating that the flock-mate is a key visual cue that they need to pay attention to’, he says.

It seems that pigeons keenly observe their surroundings, especially when flying solo, and the team is eager to incorporate a tiny camera into the sensor to get a true bird’s-eye view of the world, with the hope of eventually taking a glimpse into the minds of other bird species.