What’s a Flock of Birds Called? Understanding This Behavior in Birds 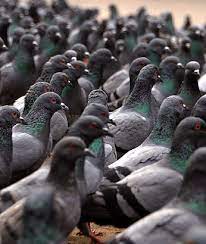 What would you call a flock of flamingos, a swarm of swallows, or a group of eagles? Different birds have different collective nouns to describe large groups, such as a raft, a band, a host, a chime, and even a kettle. While many of these terms are obsolete, seldom used, or just plain silly, they are still unique and distinctive names that are familiar to birders. Many flock names are descriptive not only of the group of birds but also of their behavior or personalities. Birds flock together mostly as a safety mechanism, for example. Birders who understand these esoteric words and associated behaviors and can apply them to the appropriate birds will enjoy birding even more.​

What Is a Flock?

Not every group of birds is automatically a flock. The two characteristics that generally constitute a flock are:

6 Sounds Birds Make and What They Mean

A flock of crows is known as a murder, a name given to these smart, social creatures because they were once thought of as omens of death, scavenging for food where there were dead bodies.

Why Do Birds Fly Together?

Birds form clusters of organized groups, called flight flocks, for a reason. Experts believe flocks increase the odds of survival and safety. Flocking can increase the possibility of finding food and protecting each other from trouble and predators. Flock of birds that fly in V formations may be doing so to conserve energy. Birds drafting off of each other’s flapping wings can make the journey easier and less exhausting.

Certain birds, such as starlings, for example, form acrobatic flocks that can turn on a dime to create shapes and undulating feats in the air. This flock behavior is meant to quickly deter their predator, the fast and furious falcon. Other birds, such as dunlins, may synchronize a subtle tilt to their bodies while in a flight flock as a way to camouflage their plumage to confuse predators.

Special Names for Flocks of Birds

When a flock consists of just one type of bird or closely related species of birds, specialized terms are often used to describe the group. The most colorful and creative flock names include: