Two Portland-area pigeon hobbyists pleaded guilty Thursday to trying to capture and kill protected hawks that bothered their expensive pigeons, but were sentenced to lighter penalties than federal prosecutors had asked for. 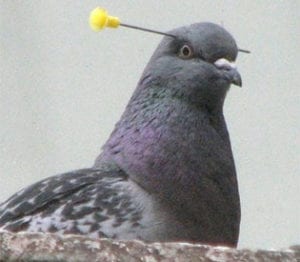 Citing public outrage over the crimes, prosecutors sought penalties of $10,000 each against Peter Kaufman and Ivan Hanchett. Each of the men pleaded guilty to one count of violating the federal Migratory Bird Protection Act. But U.S. District Judge Ancer Hagerty sentenced each to pay $4,000 — a $2,000 fine and another $2,000 to the Endangered Species Justice Fund at the Oregon Zoo, which helps pay for wildlife projects.

Hagerty went along with a request from prosecutors to sentence Kaufman and Hanchett each to one year of probation. During that year they’re prohibited from hunting and fishing, must complete 120 hours of community service and may not participate in any activities of clubs that raise birds known as roller pigeons.

Kaufman and Hanchett were leaders of the Northwest Roller Jockeys, a local club that promoted the pigeons. Roller pigeons carry a genetic trait that causes them to suddenly stop flying and tumble through the air before righting themselves. That attracts hawks and othe raptors to prey on the pigeons.

Undercover agents investigating the men and visiting their homes saw traps designed to catch and kill hawks and other migratory birds. When Hanchett introduced Kaufman to agents, he said Kaufman had killed 30 hawks within 45 days, according to court documents.

Hanchett told agents that hawks are the biggest problem facing those who raise pigeons. He said trapping and killing hawks was a common practice, the documents said. Hanchett said he tries to trap hawks and suffocate them in garbage bags. He also admitted shooting hawks numerous times, documents said.

Prosecutors told the judge in sentencing memos that though the men were charged with misdemeanors, the actions “resulted in a public outcry because of the loss of valued wildlife in Portland and the surrounding areas.”

The government received many letters and e-mails asking for serious sanctions, the prosecutors said.

Although the judge did not levy the penalties prosectors sought, Assistant U.S. Attorney Amy Potter said the sentence was still substantial for a misdemeanor crime. “I think they’re going to have a real impact, not only for these defendants, but also for others who would consider taking this type of action”

A third man, Mitchell Reed of Mount Angel, has also pleaded guilty but has yet to be sentenced. Two other men have been charged with similar crimes.