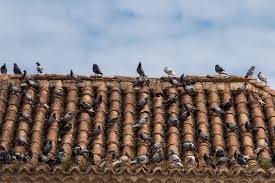 The recently changed name of Rock Pigeon reflects its traditional nesting site on rocky cliffs (replaced by buildings for feral populations) and its membership in the genus Columba, most of whose approximately 54 species are known as pigeons (Monroe and Sibley 1993). This species can be seen in a variety of colors, ranging from the white of “homing pigeons” to the mostly gray of the Old World wild population.

DISTRIBUTION. During the 1987-1992 field work seasons of the TBBA project, observers found breeding evidence across the state for Rock Pigeons, although breeding was more widely scattered in the Rolling Plains, Edwards Plateau and Trans-Pecos regions (see the region map in Lockwood and Freeman [2004]).

The 3 most common introduced species found on TBBA maps are in order: House Sparrows (Passer domesticus), widespread in all regions except the Trans-Pecos;  European Starlings (Sturnus vulgaris), widespread in Texas except for the Edwards Plateau and Trans-Pecos regions, and the Rock Pigeon. Of the doves and pigeons in Texas, atlasers found Mourning Doves (Zenaida macroura) to be even more widespread than any of the introduced species or other doves or pigeons.

This pigeon is found in the New World from south-central  Alaska, along the west coast of Canada and across the southern part of that nation to the Atlantic Coasst. From Canada the range extends south to Tierra del Fuego at the tip of South America. The species is either native or introduced to most of the Old World and many oceanic islands (Johnston 1992, Am. Ornithol. Union 1998, Sauer et al. 2007).

SEASONAL OCCURRENCE. Rock Pigeons are residents in Texas, breeding  year round, but less commonly in the coldest months (Oberholser 1974).

BREEDING HABITAT. Rock Pigeons in Texas are found primarily in cities, towns and agricultural areas (Oberholser 1974) similar to Colorado and Arizona where almost 90% of breeding was observed in these areas (Kuenning 1998, Wise-Gervais 2005). The nest, generally built in or on a building, is a carelessly arranged platform of grass, straw, feathers and debris on a solid surface. On this platform the female usually lays 2 smooth, glossy, white, unmarked eggs which are incubated by both parents for 17-19 days. The nestling period varies seasonally from 25-32 days in summer to as long as 45 days in mid-winter.   The fledglings usually remain near their parents for 1-2 weeks and may be driven away after that if they do not leave (Harrison 1979, Johnston 1992).

STATUS .Rock Pigeons are common in Texas  (Lockwood and Freeman 2004) with relative abundances as high as 10-30 pigeons per North American Breeding Bird Survey (BBS) route in a few parts of the state, although in most areas relative abundances range from <1 to <10. BBS trend data from 95 routes in Texas suggest little population change has occurred since 1980, consistent with the statistically significant survey wide trend of -1.0% annual population change (Sauer et al. 2007).