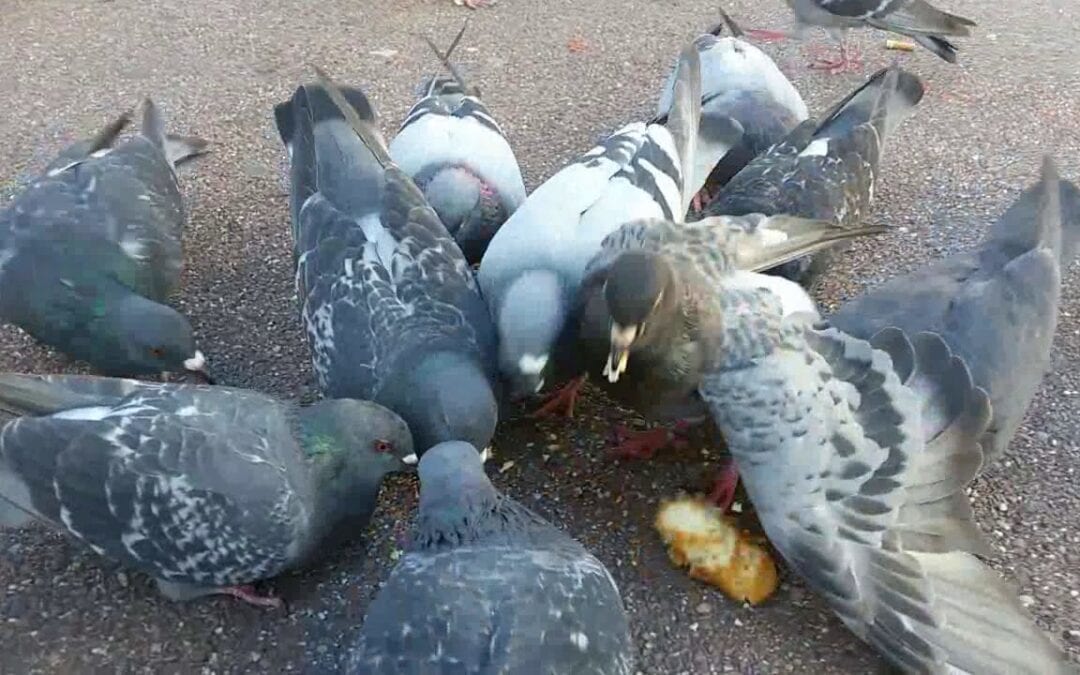 Commonly known as Pigeons, Rock Pigeons are often considered a nuisance by some city officials and some farm businesses.
In cities they congregate in large flocks and can create messes with their droppings.
On farms, eating grains and possible harm to livestock through bacteria and viruses are concerns about these birds.
Many pigeon deterents are available online to prevent nesting in areas they’re not wanted.
Introduced into North America from Europe in the 1600’s, these birds have been associated with humans for thousands of years.
Rock Doves are thought to have been the first domesticated bird, raised for meat as far back as the time of the ancient Egyptians.

Pigeons have different colors due to breeding by humans. They are the descendants of the wild Rock Dove of Europe.
About 13 inches in length with a dark gray head, iridescent neck, with a light gray back and 2 dark wing bars.

Like Mourning Doves, pairs are monogamous, often breeding in consecutive seasons for as long as both birds of a pair live.
Most will attempt to raise several broods each year. Sometimes as many as four or five broods will be raised in a single year.
The breeding season of these birds can be all year provided climate conditions allow. There seems to be some slowing down during the winter months.

The nesting habits of Pigeons are a bit unique. The male chooses a site in view of the female, selecting one stick and bringing it back, lays it in front of his mate.
The female who stays at the nesting site accepts the sticks the male brings to her and places them underneath her.
The nest of these birds can be found along building ledges, rafters, beams, under bridges or inside barns.
The nest is saucer-like in shape and made of stems and leaves.
The female may sit on the nest a day or two before the first egg is laid. Generally 2 white eggs are laid.
Both the male and female will incubate but the female will spend the most time on the eggs since she will be on the nest from mid-afternoon to mid-morning.
Incubation last for about 18 days. When the eggs hatch the young are covered in yellow down.
Young pigeons in the nest are referred to as “squabs”
Initially, the squabs are fed what is referred to as crop milk. This is a regurgitated thick liquid food that comes from the parents crops.
At about 10 days the squabs are fed increasing amounts of the food types that adults eat and are no longer dependent on crop milk.
The young will double in size in a day and a half. Making them one of the fastest growing vertebrate in the world.
Within 2 weeks the flight feathers begin to emerge and by week 3 the squabs are covered in feathers.
The tail and full feathering is completed by the 28th day and their weight is that of an adult.
The young will now leave the nest and the male will teach them what they need to know to survive.
This is 10 – 15 days longer than most of our backyard birds.
The female will begin a new clutch and this cycle will repeat about every 30 days when weather cooperates.

Do Pigeons Reuse the Same Nest

It’s more accurate to say that the same nest site is used as the second and subsequent nest are built on top of the previous nest.
Nest that are several years old can measure out to be as much as 7 inches high and 19 inches wide.

Rock Pigeons feed on the ground. To prevent seed spoilage and to keep the birds healthy a ground feeder is recommended for all ground feeding birds.
The best types of food to offer these birds are properly mixed seeds specifically made for doves and pigeons.
For more information on seeds and photos of each, please see our Bird Seed Page.

According to Professor Richard J. Herrnstein at the Harvard Psychological Laboratories they are. Pigeons were smart enough to learn all the letters of the english alphabet.
In another study, Pigeons were able to recognize themselves in a mirror. This makes them one of six species and the only non-mammal to be able to do so.
So yes, Pigeons are a pretty smart bird.

What is the Lifespan of Pigeons?

Pigeons may live 3 – 6 years in the wild with the average being 3 – 4 years. In captivity they have lived as long as 15 years depending on the care given to the bird. 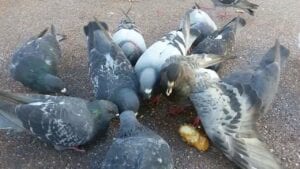 During the world wars, Homing Pigeons were trained to return to a loft in the UK.
Troops then took the pigeons with them and used them to send messages when radio and written communication were being intercepted.

Pigeons have the ability to see about 26 miles.
When fully feather, adult pigeons have around 10,000 feathers.
There are approximately 400 million pigeons in the world.
Source