Pigeons’ homing instinct is all down to smell

Scientists have discovered the secret of pigeons’ remarkable ability to navigate perfectly over journeys of several hundred miles. They do it by smell.

Research found that pigeons create ‘odour’ maps of their neighbourhoods and use these to orient themselves. This replaces the idea that they exploited subtle variations in the Earth’s magnetic field to navigate.

‘This is important because it is the first time that magnetic sensing and smell have been tested side by side,’ said Anna Gagliardo, of the University of Pisa, who led the research.

The discovery that birds have an olfactory positioning system is the latest surprising discovery about bird migration. Birds know exactly when to binge on berries or insects to fatten themselves for long flights, and some species recognise constellations, which helps them to fly at night. Birds also travel immense distances: the average Manx shearwater travels five million miles during its life. 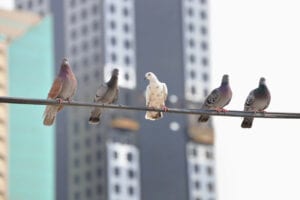 Research into navigation has included an experiment in which robins were released with a patch over one eye – some on the right eye, some on the left. The left-eye-patched robins navigated well, but those with right-eye patches got hopelessly lost. ‘It is a very strange finding,’ said Graham Appleton, of the British Trust for Ornithology . ‘It is clear the cues robins use to navigate are only detectable in one eye. Why that should be the case, I have no idea.’

In the Pisa experiments, Gagliardo, working with Martin Wild of the University of Auckland , followed up experiments done in 2004, which showed that pigeons could detect magnetic fields. She argued that this did not mean they actually did.

The 48 birds were released 30 miles from their loft. All but one of those deprived of their ability to detect magnetic fields were home within 24 hours, indicating that it was not an ability that helped them to navigate. But those who had been deprived of their sense of smell fluttered all over the skies of northern Italy. Only four made it home.

Gagliardo and her team conclude that pigeons read the landscape as a patchwork of odours.

Every spring, hundreds of millions of birds head north in order to exploit new resources. Gulls head to the Arctic to make use of the 24 hours of daylight prevailing there, while swallows and other birds leave Africa to exploit the British summertime.

The navigation involved in these long journeys is still a cause of considerable debate among scientists. Among the main theories are suggestions that some birds remember visual maps of the terrain they fly over; that they follow the lines of Earth’s magnetic field; and that night-time flyers remember star maps of the sky.

However, the discovery of pigeons’ prowess at exploiting smells is considered important because their navigational abilities are some of the most acute in the natural world. Pigeons excel at getting home when released in unfamiliar locations. That they achieve such accuracy using smell is all the more surprising.