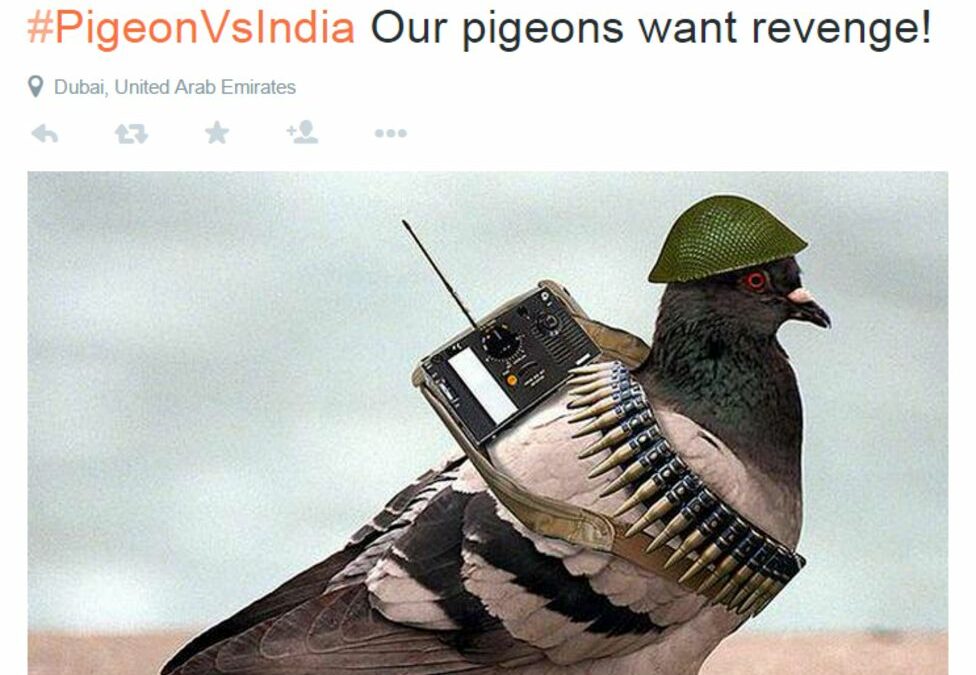 The news of a pigeon detained in India on suspicion of being used to spy for Pakistan was met with amusement on both sides of the border – and encouraged Pakistanis to share memes and jokes making fun of their neighbours.

It all started when a 14-year-old boy in an Indian village close to the border with Pakistan found a white pigeon with a message written partly in Urdu, the language widely used in Pakistan, and some numbers in on its feathers. The bird was taken to police who ordered the bird to be X-rayed. Nothing suspicious turned up, but the pigeon was registered in police logs as a “suspected spy” according to reports.

The area where the bird was found is close to Kashmir, claimed by both India and Pakistan and the scene of cross-border military confrontation.

“This is a rare instance of a bird from Pakistan being spotted here. We have caught a few spies here. The area is sensitive, given its proximity to Jammu, where infiltration is quite common,” local police superintendent Rakesh Kaushal told the Times of India.

India and Pakistan frequently accuse each other of spying. This week, the Pakistani Prime Minister Nawaz Sharif expressed concern over the actions of foreign intelligence agencies in Pakistan – which many saw as an allusion to India. But the official detention of a bird led to amusement and sarcasm on both sides of the border.

In Pakistan, pictures were created to mock the Indian authorities and portray the humble pigeon as a suave modern-day spy. The hashtags #PigeonVsIndia and #IfIWereAPigeon have been mentioned tens of thousands of times. Both hashtags appear to be promoted by two social media teams who actively seek to create Twitter trends, and identify themselves as supporters of Pakistan’s Tehrik-i-Insaf political party.