How Many Pigeons Died in WW2? 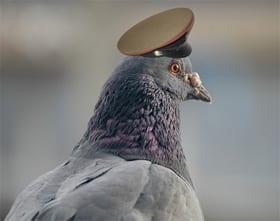 Many thousands of pigeons lost their lives in WW2.

Carrier pigeons were widely used during WW1 since telephone and telegraph technology was too new to be reliable.

Though it occurred two decades later, carrier pigeons were once again relied upon to deliver important intel during WW2, despite the advances that had been made in communication technology.

They were relied upon due to their speed and intelligence, and the altitudes they could reach.

Carrier pigeons were able to carry messages back and forth over enemy lines, being credited with saving lives and aiding victory in many battles.

During WW2, hundreds of thousands of carrier pigeons were used by the American, British, French and German military and their bravery didn’t go unnoticed with pigeons being awarded the prestigious Dickin Medal.

The medal was introduced in December 1943 and is the decoration for valor awarded to animals.

32 WW2 pigeons were awarded the medal, including G.I. Joe, one of the United States most successful carrier pigeons.

During WW2, pigeons used by the British military are credited with helping end Nazi rule in Europe.

Code named Columba, British pigeons were dropped in various locations throughout Europe with a cry for help from the British attached.

The message asked ordinary citizens to contribute to intelligence regarding life in occupation under the Nazi regime as well as military data.

More than 16,000 carrier pigeons were used in this mission and they uncovered many supporters and helped soldiers take out German regiments, as well as finding out important facts about camps and advancement plans.

Similar success stories come from all over the world, proving that carrier pigeons once again contributed to the ending of WW2 and carrying out rescue missions, saving lives and ensuring that vital intelligence ended up in the right hands.

Many of these pigeons have been stuffed and are on display around the world, shining a light on their service and educating the younger generations about the workings of WW2.

As you can imagine, many carrier pigeons died in the line of duty.

Much like human soldiers or the many horses and dogs that were used in battle, not all of the pigeons were able to survive their mission.

Though, it’s important to note that many of them took bullets and were grievously injured, but still managed to deliver the message they carried into the right hands.

In addition to battle wounds, the Nazis often released falcons to kill the pigeons used by the American and British armies in an attempt to keep them from delivering the information they carried.

While there are no exact numbers available, it’s thought that many thousands of carrier pigeons died during their service in WW2.

Many of them are commemorated and on display to this day, while others can only be remembered in other ways.

While carrier pigeons aren’t used to the same degree they once were, it’s important to preserve their place in history as part of the defeat of the Nazi party and the victory of those in opposition to the atrocities they committed.