Doves and pigeons (but not owls) 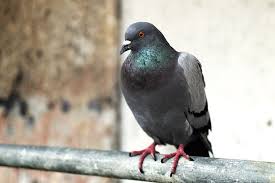 This time of year, males are proclaiming their territories calling loudly: “Whoo-whoo”

Doves and pigeons are birds that, for the most part, can be found out in the open and sitting on wires. And they are good-sized – no squinting at tiny songbirds this week.

The first bird to mention, and then pass by without much comment, is the very common Rock Dove. This is the bird that usually comes to mind when someone says “pigeon;” the bird that brings to mind the image of feeding popcorn to birds in the park. They have a wide variety of colors, but the most common is two-tone gray. They’re often seen on the ground where they confidently stride along. They are medium-sized birds, about 13,” with a 20” wingspan. They have short stubby black tails, a white rump patch, and white underwings. They fly with wings held up in a deep “V.”

Look for them at freeway interchanges, on city sidewalks, or sitting on utility poles or flying into nest sites under bridges.

Each year in the spring someone asks me about the owl they hear hooting in the trees. It seems they are hearing this calling in the daytime and are confused. However, it is not an owl at all, but rather our resident Band-tailed Pigeon. This time of year, males are proclaiming their territories calling loudly, “Whoo-whoo,” and it does sound owl-like. They are about the same size as a Rock Dove, more uniformly gray, but are usually tough to spot as they whoo-whoo way up there in their top-of-tree lofts. When they fly, it’s usually only a pair (there are always lots of Rock Doves) and they are gray all over (no white underwing for them).

Mourning Doves perhaps fit the image you have of a dove as opposed to a pigeon. They are smaller and much slimmer. They are tannish overall with black spots and have a long, pointed tail with white tips on the outer tail feathers. In flight, these white tips produce an obvious white streak along either side of the tail. These birds are found throughout the county in rural area, often perched on utility wires. They’re grain and seed eaters and readily come to feeders. They are named after their vocalization, a low mournful coo, often written “ooo, aaa, cooo, cooooo.”

And here’s an amazing story: I have a bird book published in 2000 that lists the Eurasian Collared-Dove as an introduced species, having a limited range along the southeast North American coast. In the intervening 20 years this species has expanded its range so rapidly it is now found throughout the United States, including here in Thurston County. Perhaps eight years ago, they were rare or non-existent here. Now they are at least as common as Mourning Doves.

Eurasian Collared-Doves are a bit larger than the Mourning Dove, and in good light they appear grayish rather than tan. They do not have black spots, but they do have a noticeable black collar around their necks. Their tails have outer white tips and are long and but not as pointed as the Mourning Dove. Their call is distinct; it’s still coo, but in a distinctive three syllable sequence with an emphasis on the second syllable.

People report that both species visit their feeders and, so far, it does not seem that the collared-doves, although a bit larger, are displacing our native doves. But this is certainly a possibility, and bird researchers no doubt will be tracking breeding and wintering numbers for these two species in the years to come.

As you may have read, the 2022 Avian Bird Flu has been occurring in Thurston County, killing at least one Bald Eagle. If you find dead or dying birds, do not touch or interact with them in any way. If it seems warranted, contact the Washington State Department of Agriculture’s Avian Health Program: 1-800-606-3056.

To date Avian Bird Flu does not seem to be impacting smaller birds. However in the eastern U.S., where this disease is more common, people with summer feeders are being encouraged to retire their feeders for the time being as a means of limiting bird-to-bird disease transmission.

People with chickens are advised to keep them confined, and to prevent exposure to the droppings of wild birds.

Pigeon Patrol Products & Services is the leading manufacturer and distributor or bird deterrent (control) products in Canada. Pigeon Patrol products have solved pest bird problems in industrial, commercial, and residential settings since 2000, by using safe and humane bird deterrents with only bird and animal friendly solutions. At Pigeon Patrol, we manufacture and offer a variety of bird deterrents, ranging from Ultra-flex Bird Spikes with UV protection, Bird Netting, 4-S Bird Gel and the best Ultrasonic and audible sound devices on the market today.