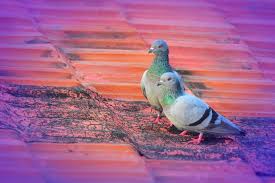 squab are young pigeons that have never flown. For thousands of years, they have been a favorite meal for every stratum of society throughout the world. They were unequivocally the first domesticated poultry, even preceding chicken.
This may surprise twenty-first-century Americans. More often we think of pigeons as annoying denizens of city monuments and buildings. In fact, these are rock doves, a relative of pigeons, and far less edible. Yet squab is considered a most exquisite ingredient in cuisines as distinct as Cantonese, Moroccan, and French. The simple reason for squab’s universal appeal is the delicate, succulent flesh, truly unlike that of any other bird. Squab is a dark-meat bird, like duck and goose, yet the meat is not nearly as fibrous, rendering it far more tender. Its flavor, when properly cooked, is a lush, rich essence, reminiscent of sautéed foie gras, albeit with more texture.

Historically, squab was a reliable and inexpensive source of animal protein. Documents detailing aristocratic banquets frequently show squab used in one or several important courses. B’stilla, a splendid Moroccan phyllo-crusted pie that is sweet, salty, crispy, and juicy at the same time, is traditionally made with squab. It dates from around the 15th century when the Moors were kicked out of Andalusia and migrated to North Africa. Huge molded timbales of pasta, and molded domes of rice made with squab and rich accompaniments, were fashionable 16th and 17th-century Italian culinary showpieces.
Early on, wide circular structures with tapered tops, or dovecotes, were built in fields to attract wild pigeons to roost. Numerous cubbyholes lined the interior, accommodating several breeding pairs. Adult birds forage independently and, being monogamous, return every evening to the same roost throughout their adult life. Other than constructing the residence facility, the squab farmer was required to do little or no maintenance except to harvest the young squab. Using a ladder, one simply plucked them from the nest.

In the United States, squab are raised primarily in central California and South Carolina. The birds weigh about 1 pound each. Large covered pens are used for up to a dozen breeding pairs. They are capable of producing up to 24 offspring a year. Parents share in all activities required to raise the squab. They build their nest together, incubate the eggs, and feed the young. The male participates willingly as long as the female accommodates him sexually on demand. When she refuses, he pecks her in the middle of the head. As a result, farmers can separate the sexes far more easily than might otherwise be the case.
They just look for the bald birds, which are females.
Sorting young squab from mature pigeons is also an easy activity. The farmer gathers his squab in a crate. When the crate is opened and shaken vigorously, any birds that fly away are not squab but adult pigeons.
No one farms squab to make a fortune. The birds’ notorious sensitivity prevents using modern poultry techniques, like those employed in the factory farming of chickens, to produce enormous flocks at minimal costs. They respond poorly to artificial insemination and inferior-quality feeds laced with animal by-products.
Farm-raised pigeons must have the same food year-round. Their nesting cubbies must never be disturbed. For this reason, the cost of squab, which has remained constant for decades, is expensive relative to mass-marketed chickens. It’s a whole lot of bother to raise good squab. But these succulent birds make a feast fit for a king.
Source