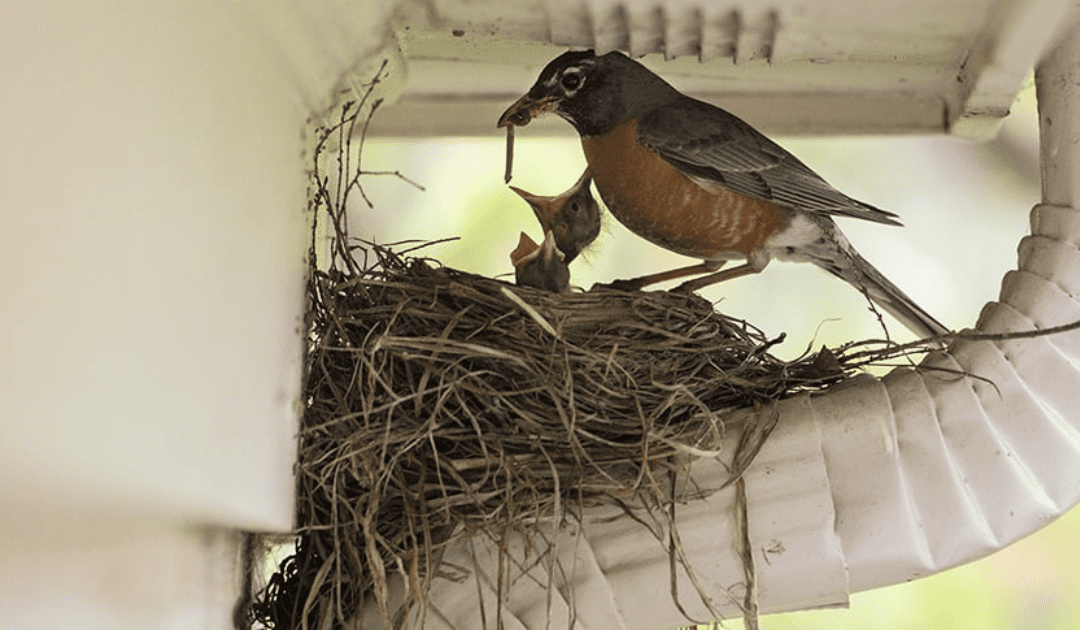 Pigeons are most often seen during daylight and will seek cover at night. They tend to flock while roosting, sunning, and feeding, and form loose colonies for nesting. Early winter is a time of courtship for pigeons, with nest building following in late winter and breeding in spring. In warm climates, however, breeding may occur throughout the year. Each pair of mates will average two eggs per season. Immense flocks take shape most often during fall and winter, as starlings are highly sociable by nature. Their breeding season begins in spring and ends in early summer, with each pair typically producing five eggs per season. When they search for a home, they will seek out crevices or holes in buildings as nesting sites.

Note that two specific behaviors of European starlings mark them as pests. First, they can damage agricultural crops and berries. Second, they pose a threat at airports (especially on runways) where flocks may get sucked into airplane engines, causing significant and costly damage to transportation.

Like European starlings, they look to crevices on or inside buildings as sites to establish nests and usually assemble their nests between February and May. Breeding season is February through August, and each pair of mates averages five eggs.

House sparrows are known to act more aggressively toward other bird species that enter their territory. In fact, they’ve been seen to threaten or even attack over 70 kinds of birds. For gardeners or farmers, this bird acts as a pest by eating large quantities of seed. source

Pigeon Patrol Products & Services is the leading manufacturer and distributor of bird deterrent (control) products in Canada. Pigeon Patrol products have solved pest bird problems in industrial, commercial, and residential settings since 2000, by using safe and humane bird deterrents with only bird and animal friendly solutions. At Pigeon Patrol, we manufacture and offer a variety of bird deterrents, ranging from Ultra-flex Bird Spikes with UV protection, Bird Netting, 4-S Gel and the best Ultrasonic and audible sound devices on the market today. source

Pigeon / Pigeon Patrol / Pigeons Roosting / Vancouver Pigeon Patrol / Bird Control / Surrey Pigeon Control / Pest / Vancouver Pigeon Blog / Birds Inside Home / Pigeons in the cities / Ice Pigeons/  What to do about pigeons/ most common types of sparrows , Damages Caused by Sparrows, How To Keep Raccoons Away, de-fence, Pigeon Nesting and Breeding Patterns and Behavior What Do I Do With a Bird Trapped in My Wall?