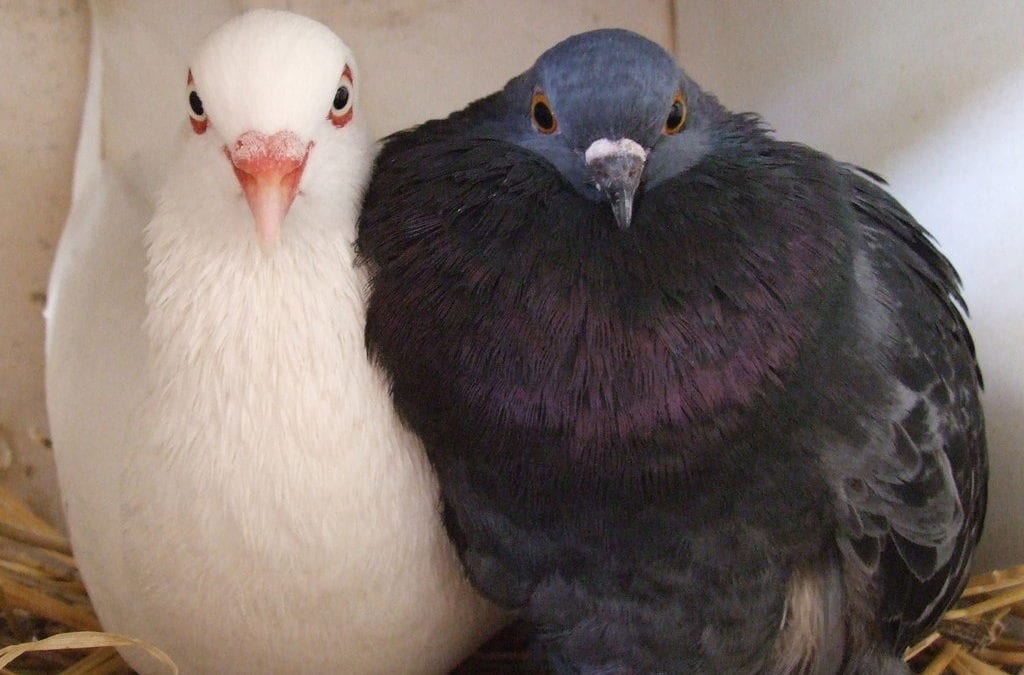 Looking to learn the differences between pigeons and doves?

Well, look no further, because you’re in the right place!

In this blog you’ll learn:

​What Are Their Differences In Size And Appearance?

Doves and pigeons are both members of the family of birds known as Columbidae.  They are similar in many respects, but there are still some noticeable differences between them.

Doves are smaller than pigeons.  Some weigh as little as 22 grams (less than an ounce).  The most noticeable aspect about them is their pointed tail.

The most plentiful breed of doves in America is the mourning dove or rain dove.  They typically range in size around 12-inches in length and weigh between 4 and 6 ounces.

The head is rounded with a distinctive crescent-shaped area of dark feathers under each eye.  They are a light grayish-brown color with lighter, pink coloration underneath, and a dark speckling on their wings.

They are strong fliers, capable of reaching speeds up to 55 mph.  At takeoff and landing their wings make an unusual whistling sound, a phenomena known as sonation, the deliberate production of sounds without using the throat or vocal cords.

The adult males have some bright purple-pink patches on the sides of their neck, along with light pink coloring reaching the breast. On the crown of their head is distinctly bluish-grey in color.

The female, by contrast, is a bit smaller than the males and instead of the male’s bright plumage have more brown coloration overall.

They are generally monogamous and both parents participate in feeding and caring for their young.  After a noisy courtship flight, the male will lead the female to several potential nesting sites in various trees until she chooses one, then helps her build the nest.

She normally lays two eggs and one or the other of them always remains with the eggs, then later with the young until they’re mature.

Doves will put on a broken-wing display in order to distract a predator who is approaching the nest and their young.  They do this by fluttering about on the ground as if they’re helpless or injured, then flying away when the predator gets close.

Pigeons are larger than doves and have a rounded tail instead of a pointed one.  They are usually 13-inches or more in length and can weigh as much as 4kg (8.8 pounds).

The most common variety of pigeons are the rock pigeons.  They’re usually light gray on their upper body and belly, with a darker gray on their head and breast.

They can be identified by the distinctive iridescent purple and green coloration on their neck and breast.  They’re not native to the United States. They were introduced into America from Europe in the 1600’s.  This means they have no natural predators to limit their population.

Homing pigeons were selectively bred from rock pigeons to take advantage of their innate ability to find their way home over incredibly long distances.  This ability is believed to be a function of magnetoreception, the ability to use the earth’s magnetic field to navigate.

Their long-distance flight speed (over distances of 400 miles) has been clocked at 50 mph sustained speed, but they can go as high as 90 mph in racing contests.

Rock pigeons have been domesticated for thousands of years, as food and as message carriers.  The males are usually larger than the females and stand taller.

They have larger beaks, with eye cores (fleshy growth around the eyes), round heads and thick napes.  Females, however, are shorter with smaller beaks and ceres.  They have flatter heads and larger breasts than the males.

Courtship rituals are noisy.  The male will puff out his chest, strut around the female bobbing his head and cooing insistently.

He will often turn completely around during his display.  Once the female accepts him, they mate for life and will often re-enact their courtship over and over throughout their lives.

Pigeons are quite content to nest on building ledges, rooftops, girders, and the rafters of warehouses.  They eat seeds almost exclusively and will take turns foraging when they have young in their nest. 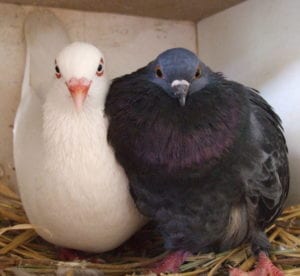 ​Are Doves and Pigeons Considered Pests?

Doves aren’t considered pests.  They generally don’t nest in and around human habitations, although they have been known to do so occasionally.

For the most part, they are considered a game bird and sportsmen enjoy a good dove hunt as much as hunting for turkeys, pheasants, or any other wild game.

When it comes to pigeons, however, the situation is a bit different.  Factories often have quite extensive problems with them nesting in the rafters of warehouses or the upper stories of a power plant.

It doesn’t take long before their population expands to the point where they become a genuine nuisance.

Their droppings discolor machinery, stairways, railings, pallets, crates, and anything else (or anyone else) unfortunate enough to be under when they “let go.”  It leaves a pungent, unpleasant odor and the biochemicals in it can accelerate the deterioration of whatever it touches.

​What Is The Cultural Significance of Doves and Pigeons?

For most of human history, doves have been considered symbols of peace. The iconic symbol of a dove carrying an olive branch in its mouth had its beginnings in the early chapters of the Book of Genesis in the Bible.

And he waited yet another seven days, and again he sent the dove out from the ark.  Then the dove came to him in the evening, and behold, a freshly plucked olive leaf was in her mouth; and Noah knew that the waters had receded from the earth.  [Genesis 8:10-11, NKJV]After the rain stopped, Noah sent out a dove but it came back.  The next time he sent it out it came back carrying an olive branch in its beak, a symbol that God’s wrath – and the waters of the Flood – was abating, and peace was returning to the world.

The New Testament also has a dove that symbolizes peace and love.  When Jesus went down to the Jordan river to be baptized by John, He came up out of the water and the Holy Spirit, in the shape of a dove, came down upon Him.

When He had been baptized, Jesus came up immediately from the water; and behold, the heavens were opened to Him, and He saw the Spirit of God descending like a dove and alighting upon Him.  And suddenly a voice came from heaven, saying, “This is My beloved Son, in whom I am well pleased.”  [Matthew 3:16-17, NKJV]That powerful imagery from these two events has stayed with us ever since and has been used in peace movements all over the world even by those who reject the Biblical story of the Flood and Jesus.

There is even a book entitled Doves and Diplomats that is dedicated to the subject.

Despite their many similarities, pigeons occupy a somewhat lower position in the, ahem, pecking order, than doves do.  There are Mesopotamian cuneiform tablets that are over 5000 years old showing pigeons being domesticated and raised for food.

They have also been used in commerce, and by the military, to carry important messages back and forth.  Early references to pigeons being used to carry messages date back to 2500 B.C.

The Roman Empire used pigeons for this purpose, as did the ancient Greeks. Whereas doves are seen more like symbols, pigeons are more often viewed as work animals or food.

Pigeons have often been housed in structures referred to as dovecotes, essentially a hen house for pigeons.  These birdhouses ranged from crude, thatch-covered huts to clay pot-shaped buildings to ornate structures designed to hold thousands of birds.

Pigeons were domesticated not only for food and for its ability to “return home” but also for sport.

Pigeon racing has a long and storied history, as do various forms of falconry and pigeon killing.  With the advent of guns, sports shooting of pigeons quickly gained popularity.

Huge numbers of pigeons would be captured, then released all at once in front of a crowd of hunters who shot them at point-blank range.

“Clay pigeons” were derived from this practice when the availability of live pigeons dwindled through over-hunting.

​How Can You Control Pigeons?

Doves don’t provide nearly the nuisance level of activity that their larger pigeon cousins do, so this section will focus mainly on pigeons.

As stated earlier, they have a regrettable habit of infesting factories and large buildings then pooping all over them, producing an unsightly mess and a health hazard.

One of the ways  PCO’s (Pest Control Operators) defend against pigeons is with the use of anti-bird spikes.  Many of them are actually called pigeon control spikes, which tells you how often they’re the culprit in these situations.

These spikes can be laid out on girders and ledges where pigeons like to nest. They can’t land without getting stabbed or hurting their feet so they eventually give up and fly away somewhere else.

A second way PCO’s control pigeon populations is through live trapping.  Bird traps are set out with bait corn in them and the doors wired open so they won’t close.

After the pigeons get used the traps and get used to going in and out without harm, then the PCO unwires the doors and lets the traps capture the pigeons.  Once the trap is full the PCO collects the birds and transports them away for release back into the wild.

The problem here is obvious; pigeons, with their natural homing ability, quickly return to their “home” in the factory or warehouse and you’re right back to square one.

The only permanent solution is to kill them with poisoned bait.  The PCO does essentially the same thing as before with the live trapping, only this time without a trap.

Unpoisoned bait is put out for a week or so to acclimate the birds to being feed at a certain place.   Once they’re feeding freely on the safe bait, the poisoned bait is substituted and the pigeons will go on eating it as usual.  Very quickly they’ll all be dead.

Is it safe to ship doves across the country for a wedding release?

Yes.  Dove release companies do this all the time without any danger to the birds.  Once released, the birds immediately fly back home again.

What should I do if I find an injured dove or pigeon?

As with any wild animal that is injured, be careful not to let them bite or scratch you.  They’re in scared and in pain.

They won’t understand that you’re trying to help them and will fight to escape.  Contact a local veterinarian for help on capturing the bird.

Is it okay to feed pigeons and doves?

Yes and no.  It’s not illegal to feed them, but you’ll definitely be encouraging them to gather for a daily feeding, which increases the amount of bird poop in the area.

They can also get quite noisy when they’re squabbling over food, which might upset your neighbors.  It might not be against the law to feed them, but it might be against good manners.

What should I feed pigeons and doves?

Birdseed for doves and pigeons is available in 6-25 pound bags.  Rather than putting it in a bird feeder as people do with smaller birds, spread it out across your backyard.

If you feed them at the same time every day it won’t be long before they’ll be out there waiting for you when it’s time.