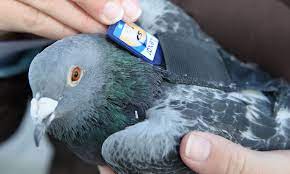 The CIA assassinated John F. Kennedy after he refused to kill and replace billions of birds with drones. The U.S. government is sequestering a team of Boeing engineers in Area 51 for a secret military mission. Our tax dollars have been funneled into building the “Turkey X500,” a robot used to hunt large birds.

Combine all these conspiracies and you get Birds Aren’t Real, a nearly two-year-old movement that claims the CIA took out 12 billion feathered fugitives because directors within the organization were “annoyed that birds had been dropping fecal matter on their car windows.” The targets were eradicated between 1959 and 1971 with specially altered B-52 bombers stocked with poison. They were then supplanted with avian-like robots that could be used to surveil Americans.

Sounds extreme but also somewhat fitting, given the landscape of today’s social discourse. By surfacing murky bits of history and the ubiquity of Aves, Birds Aren’t Real feeds into this era of post-truth politics. The campaign relies on internet-fueled guerilla marketing to spread its message, manifesting through real-world posters and Photoshopped propaganda tagged with the “Birds Aren’t Real” slogan.

For much of its devoted fanbase, Birds Aren’t Real is a respite from America’s political divide—a joke so preposterous both conservatives and liberals can laugh at it. But for a few followers, this movement is no more unbelievable than QAnon, a right-wing conspiracy theory turned marketing ploy that holds that someone with high-level government clearance is planting coded tips in the news. Therein lies the genius of Birds Aren’t Real: It’s a digital breadcrumb trail that leads to a website that leads to a shop full of ready-to-buy merchandise.

The creative muscle behind the avian-inspired conspiracy (and thinly disguised marketing scheme) is 20-year-old Peter McIndoe, an English and philosophy major at the University of Memphis in Tennessee. McIndoe first went live with Birds Aren’t Real in January 2017 at his city’s Women’s March. A video from the event shows McIndoe with a crudely drawn sign, heckling protesters with lines like, “Birds are a myth; they’re an illusion; they’re a lie. Wake up America! Wake up!” The idea of selling Birds Aren’t Real goods, he says, came after the stunt gained traction over Instagram.

McIndoe didn’t break character once during a 30-minute-long phone interview with Audubon. He defended the movement’s legitimacy, mainly by proselytizing about what Birds Aren’t Real isn’t. “The thought that this could be used to make a satire of a dark and tense time in American culture—I find those things to be baloney,” McIndoe says.

What isn’t baloney is the attention Birds Aren’t Real has drawn on social media, thanks to an Instagram account with more than 50,000 followers, a YouTube page with more than 45,000 views, and a Twitter profile with nearly 8,500 followers. McIndoe handles all these accounts and fulfills every order for the Birds Aren’t Real goods he sells online. He declined to comment on how much money he’s made off the T-shirts, hats, and stickers, many of which are out of stock.

Exploiting conspiracists for profit is nothing new, says Mike Metzler, a social media influencer and viral-content creator on Instagram. Amazon sells dozens of styles of QAnon T-shirts that have become a fixture at Make America Great Again rallies around the country. What’s different is that while many QAnon believers wear their shirts in earnest, most Birds Aren’t Real fans seem to wear theirs to be ironic and on trend.

“Birds Aren’t Real is taking advantage of the meme-ification of previous conspiracy theories,” Metzler says. “People really want to believe in conspiracies—but more than that, people want to make fun of people who believe in conspiracies even more. Starting a conspiracy theory and selling Birds Aren’t Real merchandise allows them to sell to both sides,” Metzler says.

McIndoe’s movement got a free jolt of publicity on October 30 after Chicago-based journalist Robert Loerzel tweeted a photo of a Birds Aren’t Real flier he found on the street. The same flier also popped up on Reddit numerous times over the past month. The hectic and cryptic nature of the website makes it an incubator for conspiracy theories like QAnon. The Reddit forum r/conspiracy has 721,000 anonymous subscribers alone.

While some people will draw parallels between QAnon and Birds Aren’t Real (they were both launched in 2017, after all), their popularity on Reddit is the only true similarity, says Brooke Binkowski, managing editor of the myth-busting website TruthOrFiction.com and the former managing editor of Snopes. “Birds Aren’t Real is a good one, but it in no way ranks up there with the incredible complexity of whatever QAnon is,” she says over email. “QAnon has caught on because it’s interactive, it’s always evolving, and it’s completely vague—so vague that anything they say could be ‘true’ if you interpret it the right way.”

How could Birds Aren’t Real gain more dark-web cred then? “Conspiracy theories offer a way for the world to make sense, and they offer a sense of purpose to the purposeless,” Binkowski writes. “If Birds Aren’t Real hinted at some larger, dark pattern, it would really take flight.”

For now, though, this shallow conspiracy seems harmless and may even be a net gain for birds. Jordan Rutter, the director of public relations at the American Bird Conservancy, thinks the intricate history behind McIndoe’s movement is hilarious and thus, something positive. “Anything that gets people talking about birds is a good thing,” she says. “It’s definitely a way we can start a conversation.”

The filmmaker Oliver Stone once wrote that Kennedy’s assassination is “a mystery wrapped in a riddle inside an enigma.” Birds Aren’t Real, on the other hand, is a chimera of conspiracies that wraps satire, modern insecurities, and internet culture into a successful marketing scheme.